Scientific communication #scicomm is an important albeit less stressed aspect of a researchers life. Researchers, unlike businessmen or for that matter celebrities (in the much glamorous world), need to learn to advertise themselves so as to reach a wider audience and to make sure “lay men” understand the impact of their research.

I have been following many accounts on Instagram and YouTube for people fiercely advocating and demonstrating effective scientific communication. One of them is the YouTube channel AsapSCIENCE created by Canadian YouTubers Mitchell Moffit and Gregory Brown. The channel produces weekly videos that touch on many different topics of science. I particularly like their use of animated objects to convey their messages. Videos and specifically representative symbols of words help in getting across and, more importantly, actually help understanding the message.

Inspired by this animated means of communicating science, I wanted to make a similar video myself. However, I found out that they drew those objects themselves. I was on the look out of a tool to help me make such videos, which I found because of Science Sam ! Science Sam aka Samantha Yammine, is a researcher and a Science Storyteller whom I follow on Instagram. One day I saw a post of hers saying that she did a voice over on one of the ASAPScience videos so I asked her if she knew how to make similar videos. She pointed me to this tool called VideoScribe.

So a week later on a Saturday afternoon I set aside time for myself to try out VideoScribe and this is the result:


I thanked Science Sam for pointing me out to this tool and she was quite happy that I had actually followed up. She even mentioned it in her Instagram story 😉 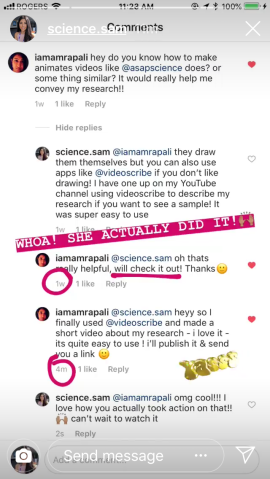 Check out the video and let me know what you think ! Would you use this kind of tool to convey your research?